Tinius Olsen is a global manufacturer and supplier of materials testing machines. We have been at the cutting edge of research and development for over 140 years, producing high quality specialist equipment to clients in many different industries around the world. 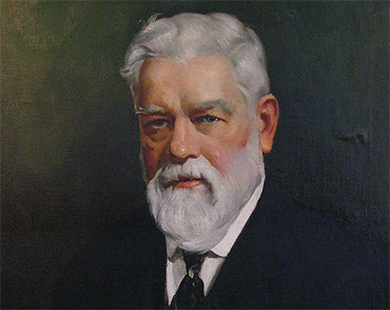 Tinius Olsen was born in Kongsberg, Norway, in 1845, one of eight children. He graduated from the Horten Technical School in 1866 and became the foreman of the machine department at a large naval machine shop. Olsen was dissatisfied and after trying to find work in Newcastle, England, left for America. The 24-year-old Olsen arrived in Philadelphia in August 1869 and found employment with William Sellers and Co as a designer.

Olsen met the Riehlés brothers, proprietors of a small workshop. The Riehlés had received an urgent request for a machine to test the strength of boiler-plate. Weak plate materials caused frequent boiler explosions, especially on steam boats that were traveling up and down the Mississippi. The brothers asked him to produce engineering drawings for such an instrument and in his spare time Olsen designed and drew precise plans for the first boiler-plate tensile testing machine, with a capacity of 40,000lbf. 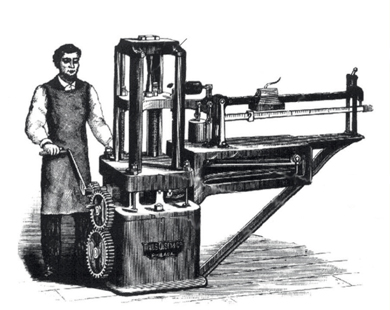 The new device, manufactured by the Riehlé brothers, proved a success and Olsen was invited to take over the workshop, becoming director of the Riehlés plant in 1872. His pioneering contributions to the emerging field of materials testing included vertical and horizontal machines for materials used in bridge construction, locomotive boilers and other industrial goods.

Olsen won many awards for his work and he asked the Riehlés to make him a partner. They refused and in late 1879 he was informed that his position would terminate at the end of the year. Olsen was full of ideas for a revolutionary device: a universal testing machine. With the support of his wife Charlotta, one of the first Scandinavian-American women to earn a degree in medicine, he set about making the drawings for his new machine. On February 2, 1880, Olsen submitted an application for a patent for a “new and useful improvement in testing machines” and patent no. 228,214 was granted on June 1, 1880.

In those days, most tests on materials required separate machines, each dedicated to a single testing function. Olsen’s machine, which he named the Little Giant, could accurately perform tensile, transverse and compression tests in one instrument, housed in a single frame. The device was compact, simple to operate and not expensive. 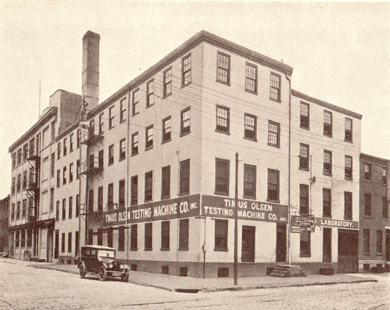 When an established Philadelphia firm declined to take on the new product, Olsen’s wife talked him into going into business for himself. He managed to establish his workshop at 500N 12th Street in Philadelphia. Soon he was taking business away from his old employers, the Riehlé brothers.

The Little Giant won gold medals at industrial expositions in Cincinnati and Atlanta in 1881. By the next year Olsen had an order for the first 200,000lbf testing machine ever made and, as an example of his diversity, he also built a machine to test the tensile strength of feathers. Olsen continued to innovate in the testing machine field for decades thereafter.

Olsen retired from the company in 1929 and died in 1933. The company that he started in 1880 is still run by his descendants and continues to provide innovative solutions to testing problems.